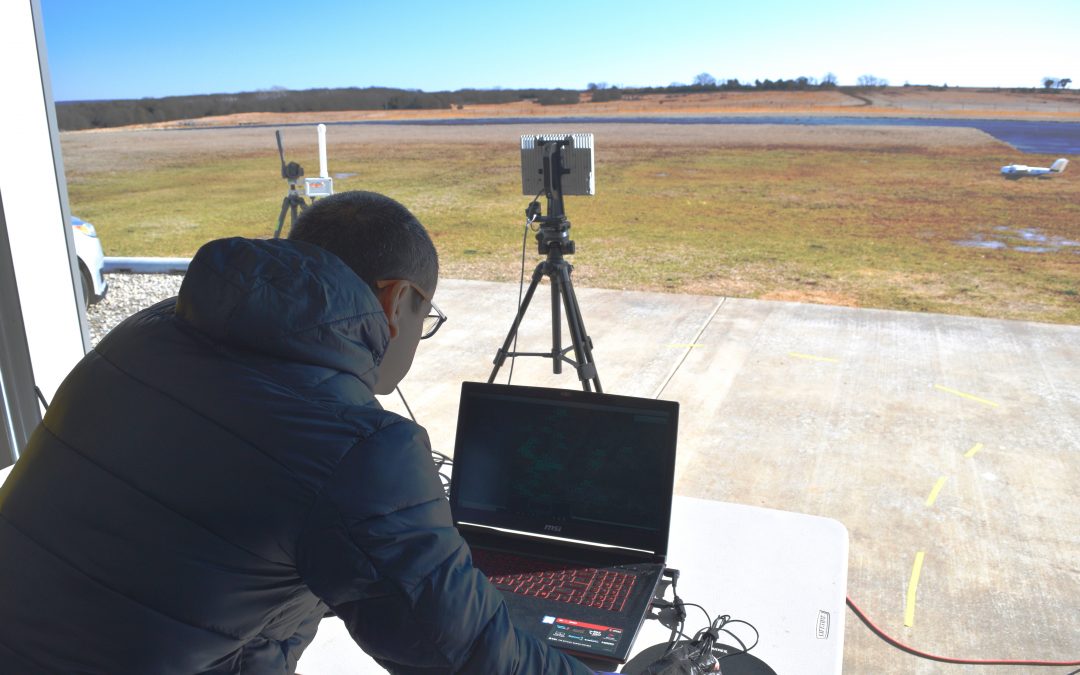 Vigilant Aerospace achieved several important milestones in the development of FlightHorizon, its safety system for unmanned aircraft, during its recent flight test with Oklahoma State University (OSU) on February 13.

The flight is the second in a series of flights being conducted in a cooperative project between Vigilant Aerospace and OSU’s Unmanned Systems Research Institute (USRI). The project is funded by a grant from the Oklahoma Center for the Advancement of Science and Technology (OCAST) and supports integration and testing of radar with the FlightHorizon system. (Read the project announcement.) 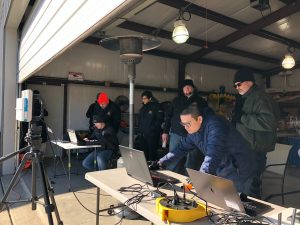 The research and flight testing team from OSU and Vigilant Aerospace review systems during the recent flight at the OSU Unmanned Aircraft Flight Station.

FlightHorizon provides detect-and-avoid (DAA) and airspace management for unmanned aircraft. It is designed to allow commercial drones to safely fly beyond visual line-of-sight and to share airspace with manned aircraft.

The ability for drone pilots and autopilots to automatically detect, track, predict and avoid encounters with manned aircraft is considered critical to the future growth of the unmanned aircraft industry.

“We were very pleased with the performance of the software and the seamless fusing of data from multiple sensors. The current software is running on an off-the-shelf laptop and is smoothly processing hundreds of megabytes of incoming signal data per second, generating the 3D airspace display with sometimes dozens of aircraft, continuously predicting trajectories and showing new traffic alerts, all in split seconds,” said Kraettli L. Epperson, CEO of Vigilant Aerospace.

The flight was launched and piloted from the OSU Unmanned Aircraft Flight Station within line-of-sight by USRI research engineers operating a twin-motor UAS below 400 feet AGL.

The recent flight test achieved several important milestones in the development and testing of the FlightHorizon safety system.

The latest version of the software fuses data from multiple sources to create a complete view of air traffic. During the flight test, the system combined data from both manned aircraft transponders (ADS-B) and from drone radio telemetry.

FlightHorizon is currently compatible with a wide range of transponder radio receivers, including the uAvionix PingStation, and with any of the hundreds of models of drone flight controllers that use the popular MavLINK protocol. 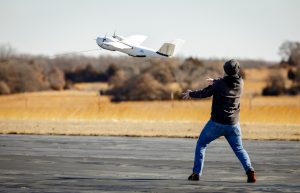 In addition, during this flight test, a candidate radar system, an EchoDyne EchoGuard, was run side-by-side with the other sensors in order to compare aircraft tracking between different sensors and to collect data for further analysis.

During this flight test, the system successfully detected, tracked and displayed dozens of aircraft along with the OSU drone. The system also generated appropriate alerts and displayed distances between aircraft including industry-standard “well-clear” safety distances in the 3D airspace display.

The flight test was also a major demonstration of the new FlightHorizon 2.0 architecture which incorporates best-in-class enterprise software components. The software architecture provides a highly modular, scalable and extensible system that performs smoothly under high load and which can be scaled up and distributed when additional capacity is needed. Read more about FlightHorizon 2.0 here.

“The ability to fuse and display data from multiple sources into a single picture of the airspace and to perform tracking and trajectory prediction across targets from multiple data sources is really a critical function for detect-and-avoid systems,” said Epperson.

The research and development team is looking forward to the next round of test flights in April and May, 2020.

“In the future, we eagerly anticipate both having radar tracking directly in the FlightHorizon system and also the demonstration of distributed installations across multiple computers, fusing data from sensors at multiple locations,” said Epperson. 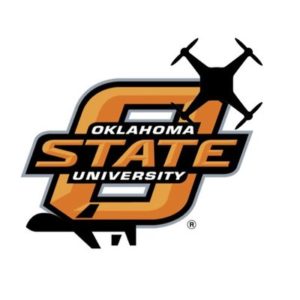 From the website:
Unmanned vehicles have become a revolutionary technology that is taking the world by storm. The OSU Unmanned Systems Research Institute (USRI) accesses expertise across Oklahoma State University allowing them to combine cutting edge product development with academic knowledge and resources to create unique solutions to critical problems. For more information on the OSU Unmanned Systems Research Institute, visit CEAT.okstate.edu/USRI.

From the website:
The Oklahoma State University School (OSU) of Mechanical and Aerospace Engineering (MAE) instructs and encourages students to reach full potential in technical expertise, innovative expression, intellectual curiosity, and collaborative design. MAE’s mission is to prepare engineers that are competitive nation-wide and internationally for employment opportunities and who will become respected achievers within their discipline and prepared for a lifetime of continuing development. For more information on the OSU School of Mechanical and Aerospace Engineering, visit MAE.okstate.edu.

The Oklahoma Applied Research Support (OARS) program is an OCAST funding program that invests in research and development supporting innovative technologies with commercial potential. This funding is designed to increase investment in the R&D of new technologies that will ultimately bring value to the state of Oklahoma and help grow and diversify the state’s economy. Oklahoma public or private colleges/universities, non-profit research institutions, and private enterprises with the principal place of business in Oklahoma are all eligible to apply for OARS funding. To learn more about OARS, visit the program website.

FlightHorizon is a situational awareness and safety system for airspace management. The system provides airspace managers with either a 2D or 3D view of all aircraft in the selected airspace using a combination of sensors and data sources to create an airspace safety picture for pilots, airspace managers and command centers.

The system is based on an exclusively licensed NASA patent and prototype that has been used in extensive flight testing, including beyond visual line-of-sight (BVLOS) flight testing at NASA Armstrong Flight Research Center and at the OSU Unmanned Aircraft Flight Station.

FlightHorizon functions as both a visualization tool for airspace management, an active situational awareness tool and as a detect-and-avoid system that enables unmanned aircraft to avoid other aircraft and keeps drone pilots and airspace managers aware of the location and air traffic around their UAS and in their airspace. The system provides the ability to designate one or more aircraft as “ownship” and to track those aircraft specifically for collision avoidance and provides self-separation advisories for those aircraft, including visual cues, on-screen text warnings and audible advisories. FlightHorizon is also designed to help users to better meet civil aviation authority regulations and requirements and to reduce risk. It can also improve the relative competitiveness of subscribing airparks in attracting UAS operators and service providers. For more information on FlightHorizon, visit our Products and Services page. 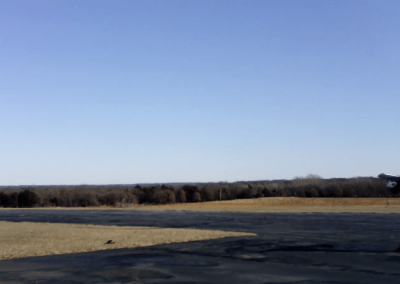 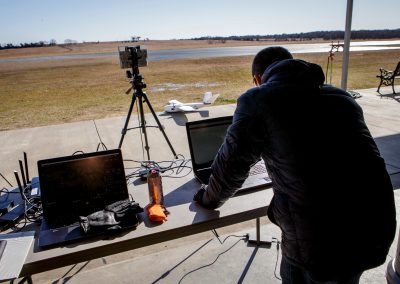 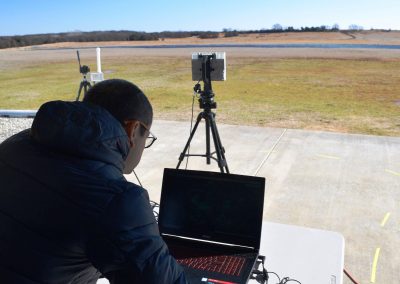 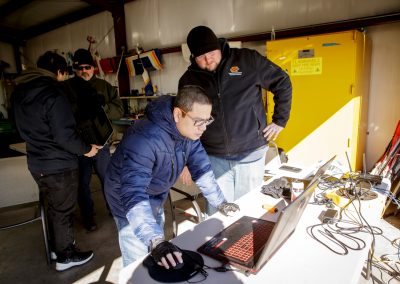 The OSU and VAS team setting up for the flight at the OSU Unmanned Aircraft Flight Station.
Photo Credit: Gary Lawson/Oklahoma State University 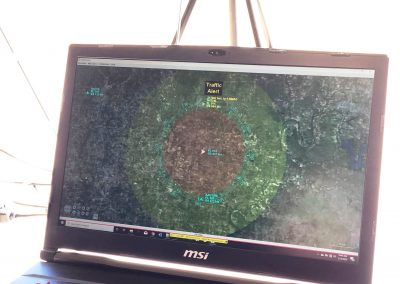 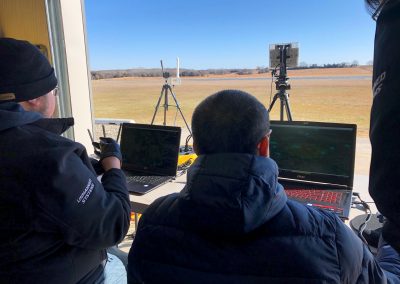 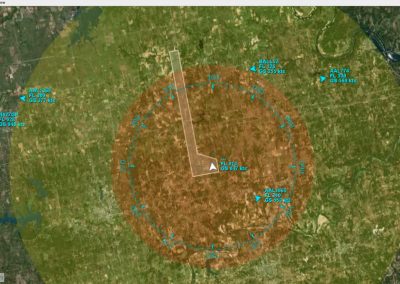 Airspace display capture from FlightHorizon during the flight demonstration on Feb. 13, 2020 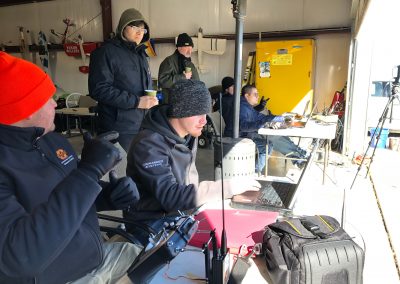 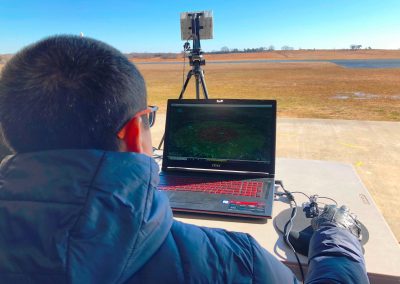 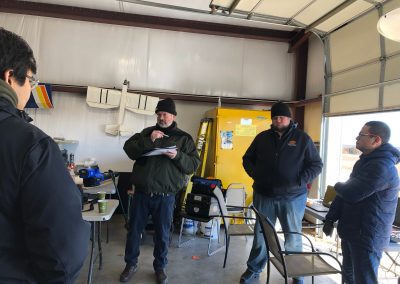 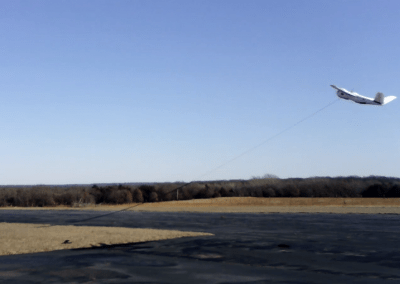 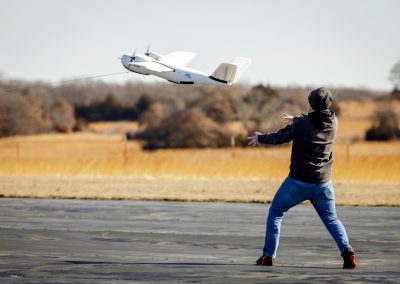 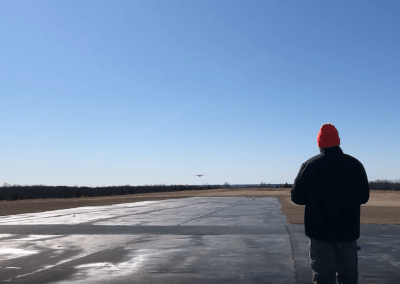 OSU UAS pilot landing the drone at the end of the flight demonstration.