FlightHorizon COMMANDER is a situational awareness and safety system for airspace management. The system provides airspace managers with either a 2D or 3D view of all aircraft in the selected airspace using a combination of sensors and data sources to create an airspace safety picture for pilots, airspace managers and command centers.

The system is based on an exclusively licensed NASA patent and prototype that has been used in extensive flight testing, including beyond visual line-of-sight (BVLOS) flight testing at NASA Armstrong Flight Research Center and at the OSU Unmanned Aircraft Flight Station.

FlightHorizon COMMANDER functions as both a visualization tool for airspace management, an active situational awareness tool and as a detect-and-avoid system that enables unmanned aircraft to avoid other aircraft and keeps drone pilots and airspace managers aware of the location and air traffic around their UAS and in their airspace.

The system provides the ability to designate one or more aircraft as “ownship” and to track those aircraft specifically for detect-and-avoid and airspace management and provides self-separation advisories for those aircraft, including visual cues, on-screen text warnings and audible advisories.

The system is also designed to help users to better meet civil aviation authority regulations and requirements and to reduce risk. It can also improve the relative competitiveness of subscribing airparks in attracting UAS operators and service providers. 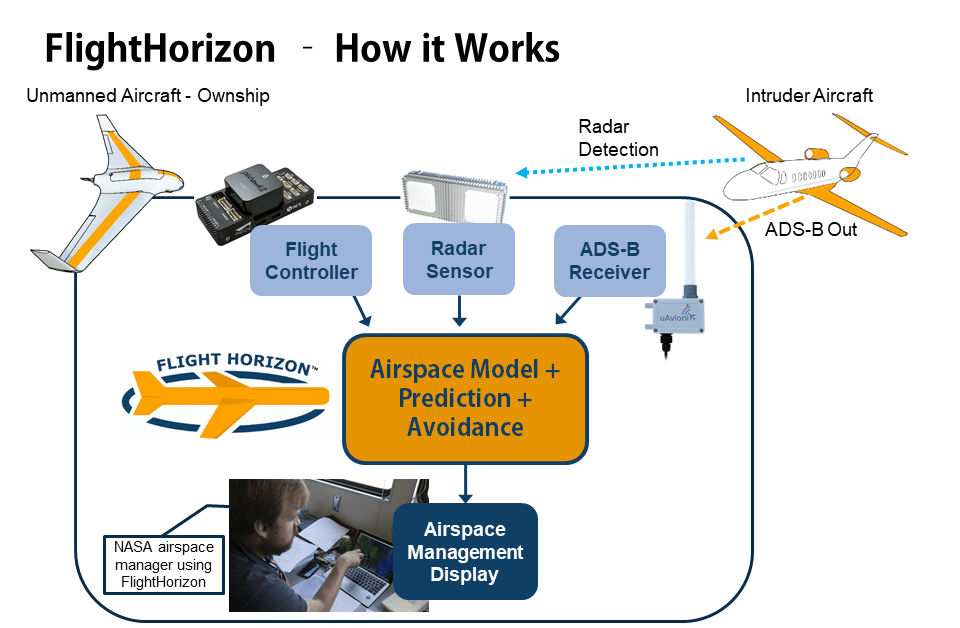 FlightHorizon COMMANDER tracks nearby air traffic using both cooperative (radio transponder) and non-cooperative (radar) sensors. The system fuses multiple data sources into a single display and user interface. This provides airspace managers with a single, coherent data source for managing flight safety, providing consistency across data sources, automatic tracking and updating of all aircraft locations, and provides visual, textual and audible traffic alerts and warnings. By providing a unified display for all data sources and automatically providing self-separation and avoidance advisories when necessary, the manager workload and overall risk is reduced while safety is improved.