The software, exclusively licensed by Vigilant Aerospace Systems, outlined in the document provides the foundation for our FlightHorizon detect and avoid avionics software for manned and unmanned aircraft systems.

As this research has great implications for the future of sense-and-avoid technology in the national airspace, we’ve shared some highlights from the research document below.

Below is a brief summary with excerpts explaining what this research means for the future of unmanned systems integrations into the national airspace.

ADS-B can be broken into two categories: ADS-B Out and ADS-B In.

Typically, ADS-B systems rate a navigation accuracy category (NACp) ADS-B accuracy parameter of 8 or 9 rather than the standard radar systems which typically rate at a NACp of 6 or 7.

Also, ADS-B systems have less physical and mechanical drawbacks allowing for more information to transmit more efficiently: “Without the mechanical constraints of radar-based systems, ADS-B systems can update an aircraft state much faster (typically 1Hz, instead of once every 12 seconds).” 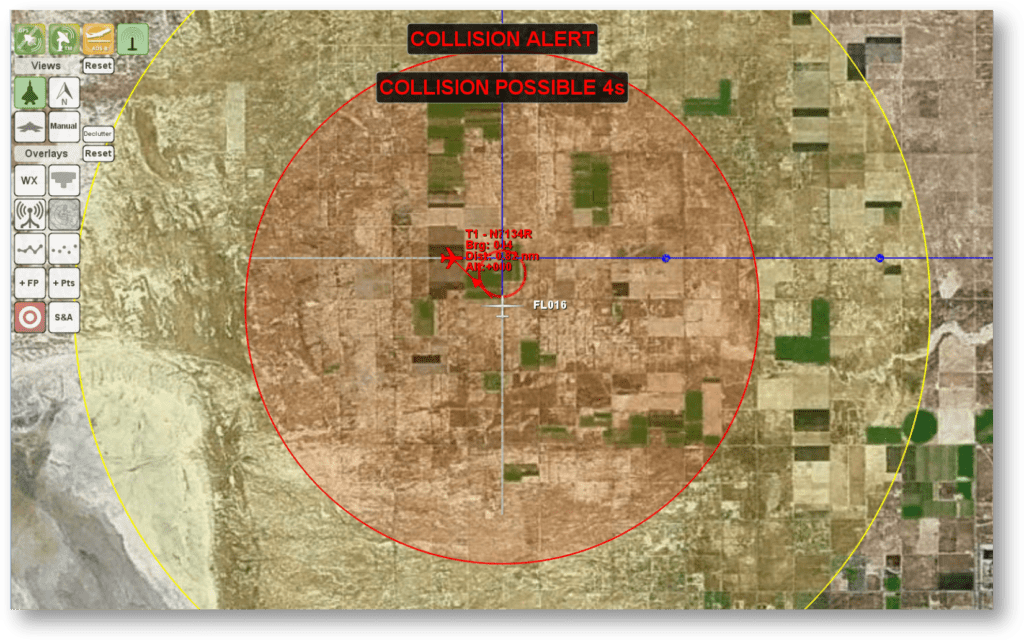 The image to the right is a screen shot of the ADS-B traffic display showing (a) the conflict detection sphere, (b) intruder and encounter information data, (c) range selection with automatic zoom, (d) the ownship selection for sense and avoid, and (e) the sense and avoid toggle on/off for selected target.

“Target detection is accomplished by the ADS-B transceiver, which can either be airborne or on the ground. The Stratway algorithm is then used for detecting conflicts as well as performing self-separation avoidance maneuvers.”

All resolution advisories (RAs) are both visually represented in the display and provided in vocalized alerts that direct the pilot in maneuvers to increase separation with conflicting aircrafts.

“Stratway is an optimized resolution, and the way in which we present its output to the end user is specific enough to ensure that it is treated as such. Our strategy instructions are accompanied by details including maximum bank angle (limits the bank angle an aircraft can achieve) and maximum rate of climb and descent for the respective maneuvers. This approach helps to ensure the ownship remains conflict-free in scenarios with multiple target aircraft.”

When a conflict is detected, analytical strategies are iterated. Strategy parameters are iterated until a conflict no longer exists. This process is represented below in Figure 5 above, which illustrates a conflict resolution operating on a latitude and longitude of a point. Two initial points are chosen (points A and C) with a diverted point between which is “shifted further from the original flight until the operational limits of the ownship have been reached or separation is maintained.”

Sense and Avoid Sub-Functions of System

Before conducting a live test of the sense and avoid software, a simulation tool was designed into the software to allow for NASA pilots to test and score the user performance and experience of working with the software. The test was conducted on a range of pilots including a fighter pilot, large transport pilot, general aviation pilot, and unmanned aircraft vehicle pilot.

“Each pilot was asked to fly an encounter scenario, such as the scenario shown in Fig. 7, in this simulated environment after having received minimal instructions on how to use the software. Each encounter scenario had at least one future loss of separation in the horizontal or vertical dimension. At the onset of the simulation, the two aircraft were on a direct collision course.”

After running the simulation, each pilot rated the software on the usefulness, accuracy, timeliness of the RAs as well as the pilot response time (general ability to follow the visual and aural cues). The table below shows the results of the pilot usability test. 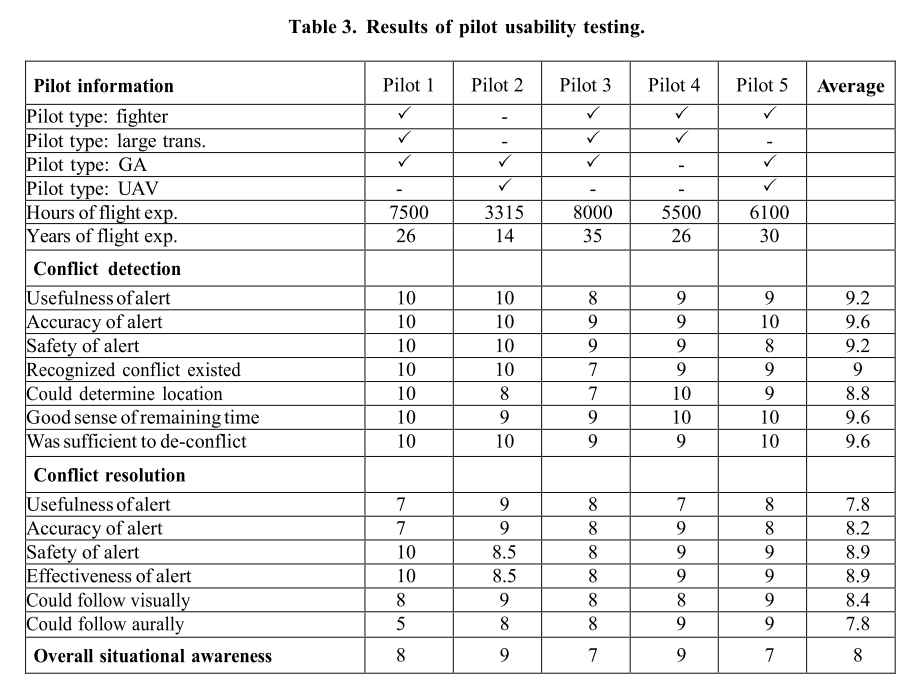 On August 3, 2015, NASA conducted a “proof of concept flight of the [sense and avoid software] display system.” An instructor pilot flew a training mission in a Cessna 172 manned aircraft equipped with and recording ADS-B In surveillance data.

During this real-time flight test, the ADS-B system recorded two surveillance targets (aircrafts in range), which were detected and tracked in real-time.