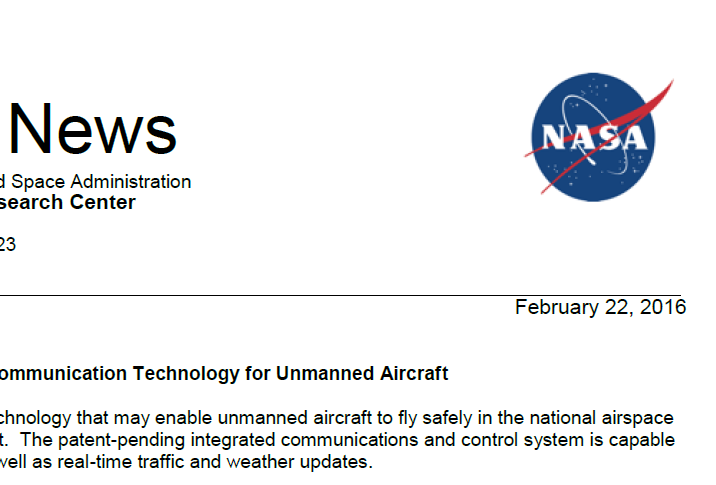 Here is the full text of NASA’s announcement:

NASA has developed technology that may enable unmanned aircraft to fly safely in the national airspace along with piloted aircraft. The patented (USTPO Patent #9,405,005) integrated communications and control system is capable of collision warnings as well as real-time traffic and weather updates.

This communication system brings unmanned aircraft a step closer to flying in the national airspace using an aircraft tracking system called the Automatic Dependent Surveillance Broadcast, or ADS-B, which is to be mandated by the Federal Aviation Administration for most aircraft by 2020.

NASA Aeronautics Research Mission Directorate researchers have been working on technologies that would allow these unmanned aircraft to share the national air space with piloted aircraft through its program called Unmanned Aircraft Systems in the National Air Space or UAS in the NAS.

“We are excited to enter into a license agreement with Vigilant Aerospace Systems allowing for the transfer and commercialization of the Automatic Dependent Surveillance Broadcast System for Own-ship, under direct control of the pilot, and Traffic Situational Awareness technology,” said Laura Fobel, chief of Armstrong’s technology transfer office. “We look forward to working with Vigilant over the coming years.”

Vigilant Aerospace Systems intends to commercialize the technology as part of its new FlightHorizon product suite and equip manned and unmanned aircraft with the hardware and software that provides synthetic cockpit views and detect-and-avoid commands to improve flight safety for all kinds of aircraft.

“One of major advantages of this system is that it uses existing FAA infrastructure to help keep drones away from other aircraft,” said Kraettli L. Epperson, CEO of Vigilant Aerospace Systems. “It also gives nearby aircraft the ability to be aware of the drone and improves situational awareness for the drone operator.”

The new technology has been tested extensively on Armstrong’s remotely piloted aircraft named Ikhana. Also known as a Predator B, Ikhana supports both science missions and aeronautical technology development such as the UAS in the NAS project.

“We were excited about licensing this technology because we see the potential for these particular inventions to not only make significant contributions to flight safety for both unmanned and manned aircraft but also to be a platform technology for the future of flight automation,” said Epperson.