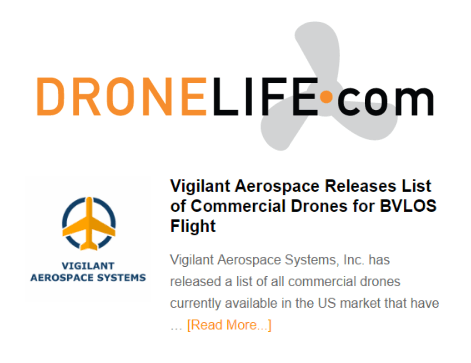 DroneLife.com, a leading commercial drone news source, covered the release of Vigilant Aerospace’s Beyond Line-of-Sight Drone List. Excerpt from the article: “We believe that the future of unmanned aircraft in the US has arrived, and only a few obstacles remain for full commercial adoption and use of drones for routine long-range commercial and industrial work,” said Kraettli L. Epperson, CEO and co-founder of Vigilant Aerospace. “One of those obstacles is access to drones with the range, command and control capability and payload to do useful work. Our new list is designed to help overcome this obstacle. The other barrier is access to effective, well-tested detect-and-avoid systems that meet FAA requirements. We bridge that gap with our FlightHorizon product, which provides detect-and-avoid capabilities to prevent collisions for piloted or fully autonomous drones, and helps operators to obtain a beyond line-of-sight waiver from the FAA,” said Epperson. US-based Vigilant Aerospace Systems is an industry-leading provider of flight management and safety systems for both manned and unmanned aircraft. Their solutions have been developed by NASA and are designed to comply with FAA performance standards. The company’s avionics software platform, FlightHorizon, is based on an exclusively licensed NASA patent and provides situational awareness, synthetic cockpit views, commands to maintain well-clear distances and other flight information to enable integration of commercial drones into the national airspace. Vigilant Aerospace is providing and maintaining the list as a free, complementary resource to support the emerging commercial drone industry. The list includes for each drone the manufacturer, model, aircraft type, intended purpose, weight, maximum speed, endurance, length, wingspan, maximum take-off weight, maximum payload, remote range, approximate price and a link to the aircraft on the manufacturer’s website. The list can be downloaded at the Vigilant Aerospace website. Read the full article from DroneLife.com: http://dronelife.com/2017/01/13/vigilant-releases-list-of-comemrcial-drones-for-bvlos-flight Get the Beyond Line-of-Sight Commercial Drone List: [update coming soon!] About DroneLife.com DroneLife is the trusted news source for the commercial usage of drones. DroneLife’s mission it to provide the information, the tools, and deals to allow consumers to make informed and educated drone purchases through articles, guides, and regulatory information from industry experts. http://DroneLife.com