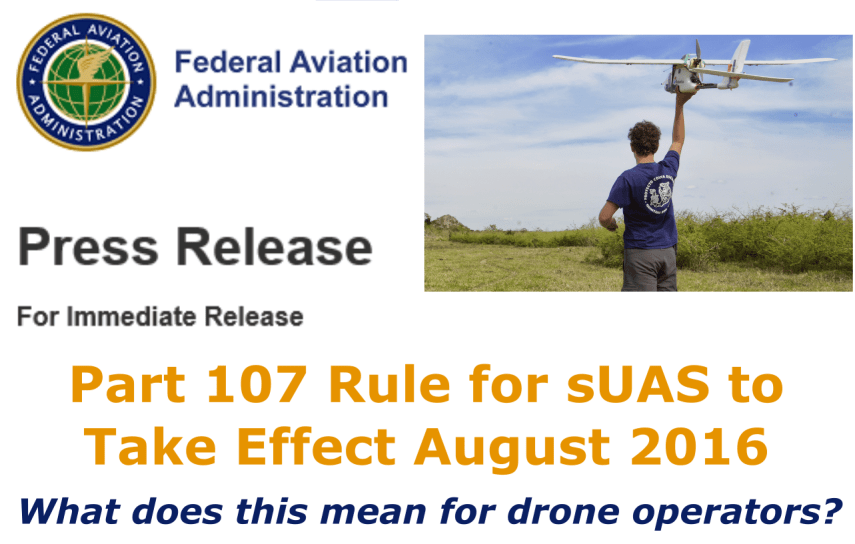 The new operational rules allow businesses to fly drones in the U.S. as long as they are under 55 lb. and comply with current registration requirements by registering their aircraft (which includes a $5.00 registration fee).

The regulations also stipulate that pilots must be 16 years or older and have a remote pilot certificate rated for unmanned aerial systems (UAS) operation, or must at least be directly supervised by a certified UAS pilot.

Individuals wishing to obtain a certificate must either pass the initial aeronautical knowledge test at an FAA-approved knowledge testing center or have/obtain a non-student Part 61 pilot certificate.

Part 107 rules still require all drones to be flown within visual line of sight at no higher than 400 feet above ground level (AGL) during daylight or twilight hours.

The rules also stipulate that drones cannot be flown over people not actively participating in the operation or observation of the drone and prohibits flight within 5 miles of an airport tower, unless permission has been granted by the tower (exact means of gaining permission has not yet been worked out).

This means that many businesses, such as Amazon, are still waiting for the FAA to announce a solution to allow for the expansive use of commercial drones for deliveries, research, and much more that cannot currently be completed within line of sight. The demand for drone flight beyond visual line (BVLOS) of sight presents a great opportunity for ADS-B detect-and-avoid systems to provide a solution to the drone revolution.

Now, it is a matter of seeing how the FAA handles the integration of the growing drone population into the airways and how the market will react the the increasing need for small UAS detect-and-avoid systems.

According to industry estimates released in the press announcement today, “the rule could generate more than $82 billion for the U.S. economy and create more than 100,000 new jobs over the next 10 years.

The drone boom is here and we are excited to be part of the rising tide of companies in the industry.

Stay up-to-date on the UAS regulations with our resources list!

For more UAS Pilot and Part 107 information, check out our UAS Pilot Resources page, where we provide up-to-date UAS regulations and steps to start flying!