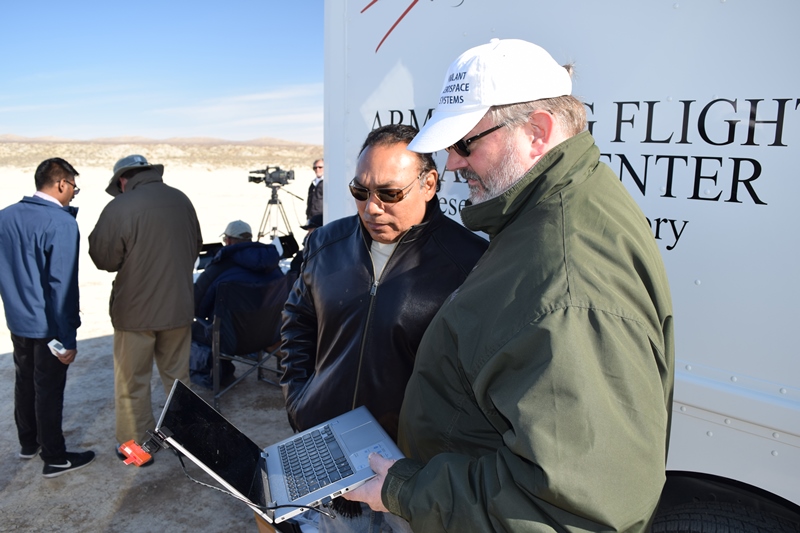 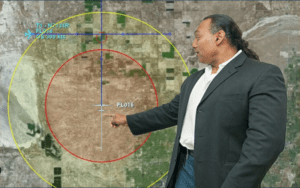 NASA has published a new research paper on the beyond visual line-of-sight (BVLOS) flight testing and nearly 350 flight encounters carried out on the FlightHorizon detect-and-avoid and situational awareness system. The research paper, titled “µADS-B Detect and Avoid Flight Tests on Phantom 4 Unmanned Aircraft System” has been accepted for publication by the prestigious American Institute of Aeronautics and Astronautics (AIAA) and for presentation at the upcoming 2018 AIAA SciTech conference on January 11th, 2018 in Florida. The full conference agenda is available here [PDF]. The paper is co-authored by NASA Senior Engineer Ricardo Arteaga who is the inventor of the patent (#9,405,005) and technology underlying FlightHorizon, by his research team at NASA Armstrong Flight Research Center (NASA AFRC), and by the Vigilant Aerospace technical staff. The research behind the paper was conducted under a Space Act Agreement between NASA AFRC and Vigilant Aerospace Systems. Read the full 21-page document: µADS-B Detect and Avoid Flight Tests on Phantom 4 Unmanned Aircraft System [PDF] 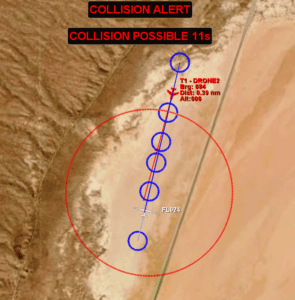 The paper is the official report and analysis on multiple test flight campaigns carried out in late 2016 through mid-2017. Flights included BVLOS flight testing carried out at NASA AFRC in December 2016 with approximately 100 unmanned-to-unmanned aircraft encounters, flight encounters carried out with improved versions of the FlightHorizon software by Vigilant Aerospace’s technical staff in both Oklahoma City and at the Oklahoma State University Unmanned Aircraft Flight Station in Stillwater, Oklahoma in May 2017 and another approximately 250 flight encounters between manned and unmanned aircraft at NASA AFRC in August 2017. Data collected during the flight testing included detailed airspace logging, including all air traffic and encounter scenarios; binary signal logs from aircraft transponders; software screen captures, on-board and ground-based video capture and detailed flight planning and lab book documentation on the flights.

Vigilant Aerospace’s product, FlightHorizon, provides individual unmanned aircraft pilots, autopilots and airspace managers with a complete situational awareness and detect-and-avoid system, integrating data from aviation transponders, airborne and ground-based radar, and other sources to provide airspace visualization, air traffic warnings and autonomous avoidance commands. The system is based on an exclusively licensed NASA patent and prototype which has been the subject of extensive flight testing. The product is currently in commercial test flights with select customers. The paper was selected for presentation at the 2018 AIAA Information Systems-AIAA Infotech @ Aerospace track of the 2018 AIAA SciTech Forum next month in Kissimmee, Florida. The session, titled “Detect-and-Avoid Technologies for UAS,” will be presented by NASA Senior Engineer Ricardo Arteaga. 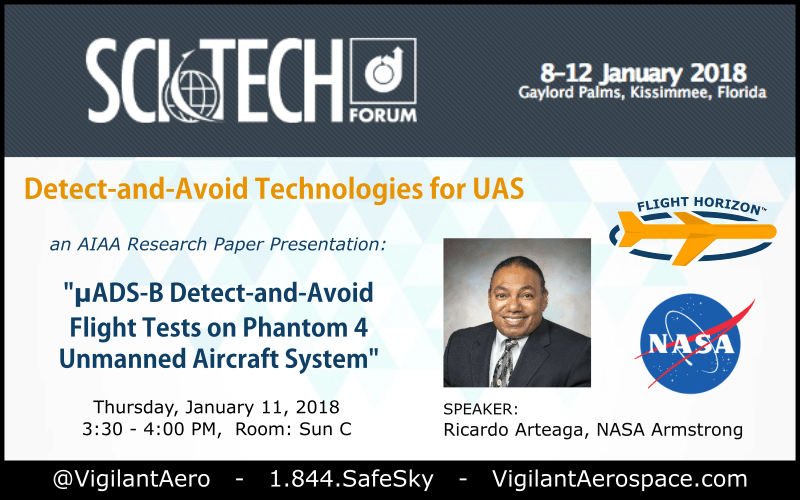 a 2018 AIAA Information Systems-AIAA Infotech @ Aerospace technical paper presentation 3:30 – 4:00 PM on Thursday, January 11, 2018 Speaker: Ricardo Arteaga Location: Gaylord Palms, Kissimme, FL (Room: Sun C) Vigilant Aerospace CEO, Kraettli Epperson will also be attendance at the conference. Please contact Vigilant Aerospace is you would like to schedule a meeting during the day on Thursday, Jan. 11th or Friday, Jan. 12th.     About NASA Armstrong Flight Research Center The Armstrong Flight Research Center is NASA’s primary center for atmospheric flight research and operations. NASA Armstrong is chartered to research and test advanced aeronautics, space and related technologies that are critical to carrying out the Agency’s missions of space exploration, space operations, scientific discovery, and aeronautical research and development. About Ricardo Arteaga Ricardo Arteaga is a NASA Research Engineer on the NASA Constellation, SOFIA, and UAS-NAS programs with over 34 years of experience in the field of Government and Aerospace engineering development programs, including the design and integration of navigation systems on the F/A-22 , B-2, and F117A aircraft. Arteaga received his Engineer’s Degree and Master’s Degree from the University of Southern California with a focus in Systems Engineering and also received a Master of Science in Computer Engineering from Syracuse University. He is the investor of multiple patents and is a national expert in aviation transponder systems and flight safety. About FlightHorizon The barrier to full commercial adoption of drones in the US is access to effective, well-tested detect-and-avoid systems that meet FAA requirements. Vigilant Aerospace Systems bridges that gap with FlightHorizon software, which provides detect-and-avoid capabilities to prevent collisions between drones and manned aircraft. The system accepts data from a variety of sources including aviation transponders, air traffic control systems and radar feeds to detect and track other aircraft and can send avoidance commands to a pilot or directly to an autopilot to get well clear of potential conflicts quickly and efficiently. Read the FlightHorizon Products and Services Overview for more details.

About the AIAA Science and Technology Forum and Exposition (AIAA SciTech Forum) From its creation in 1963, the American Institute of Aeronautics and Astronautics (AIAA) has organized conferences to serve the aerospace profession as part of its core mission. SciTech is one of five major technical conferences based on five forums focusing on themes of – Science and Technology, Aviation, Space, Propulsion and Energy, and Defense.