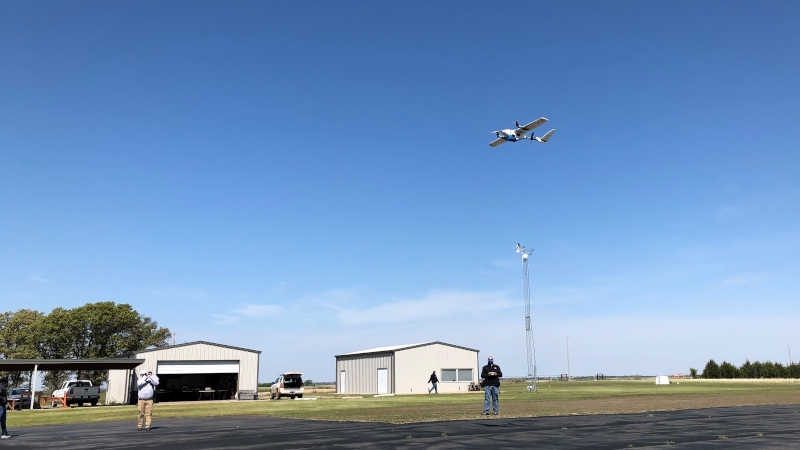 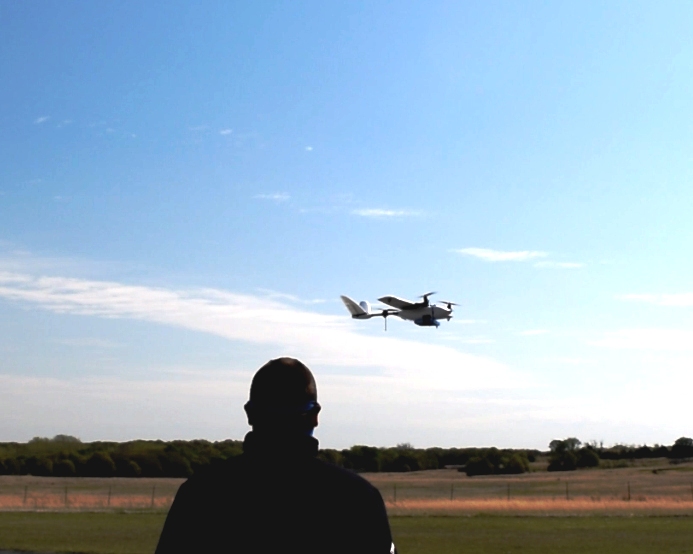 The OSU Nimbus VTOL V2 UAS landing while carrying the MaxQ medical supply payload during the flight test on April 16, 2020.

The system is designed to deliver medical supplies and testing kits for pandemic relief and other disaster response efforts using unmanned aircraft to speed delivery and reduce risk.

The FlightHorizon system provides air traffic monitoring and safety to allow drone flight beyond the visual line-of-sight of the pilot, which is required for FAA authorization. The flight was carried out by OSU’s Unmanned Systems Research Institute.

“Our goal with this flight was to demonstrate the key elements of a safe beyond visual line-of-sight medical supply delivery drone system that is affordable, highly portable, complies with industry standards and is waiver-ready,” said Kraettli L. Epperson, CEO of Vigilant Aerospace.

“To reach that goal, OSU has combined an efficient VTOL aircraft customized with a temperature-controlled payload and we provided our portable detect-and-avoid system with on board telemetry, transponder tracking and radar,” said Epperson.

The aim of the flight was to demonstrate the ability to track the emergency delivery aircraft and all surrounding air traffic to maintain situational awareness and predict potential conflicts. Air traffic and the drone were tracked throughout the flight in real time using FlightHorizon.

This flight was conducted as part of the research and development project funded by the Oklahoma Center for the Advancement of Science and Technology’s (OCAST) Oklahoma Applied Research Support program (OARS), which funds innovative projects in industries critical to Oklahoma’s economy. Read more about this project and OCAST here.

Vigilant Aerospace is a technology startup that is developing aviation safety software to unlock the full economic impact of unmanned and autonomous aircraft in the US national airspace. The company has exclusively licensed a NASA patent and used the innovations to develop its FlightHorizon software.

FlightHorizon helps unmanned aircraft to automatically maintain safe distances from manned aircraft by accepting data from multiple sensors, tracking air traffic and providing drone pilots or autopilots with avoidance commands when a conflict is predicted. The company’s product prototype is currently being used in multiple NASA and FAA R&D projects and the company has a research project with OSU to integrate radar. The system has been the subject of multiple research papers co-authored with NASA.

Takeoff of the OSU drone with MaxQ payload at the OSU Unmanned Aircraft Systems Flight Station. 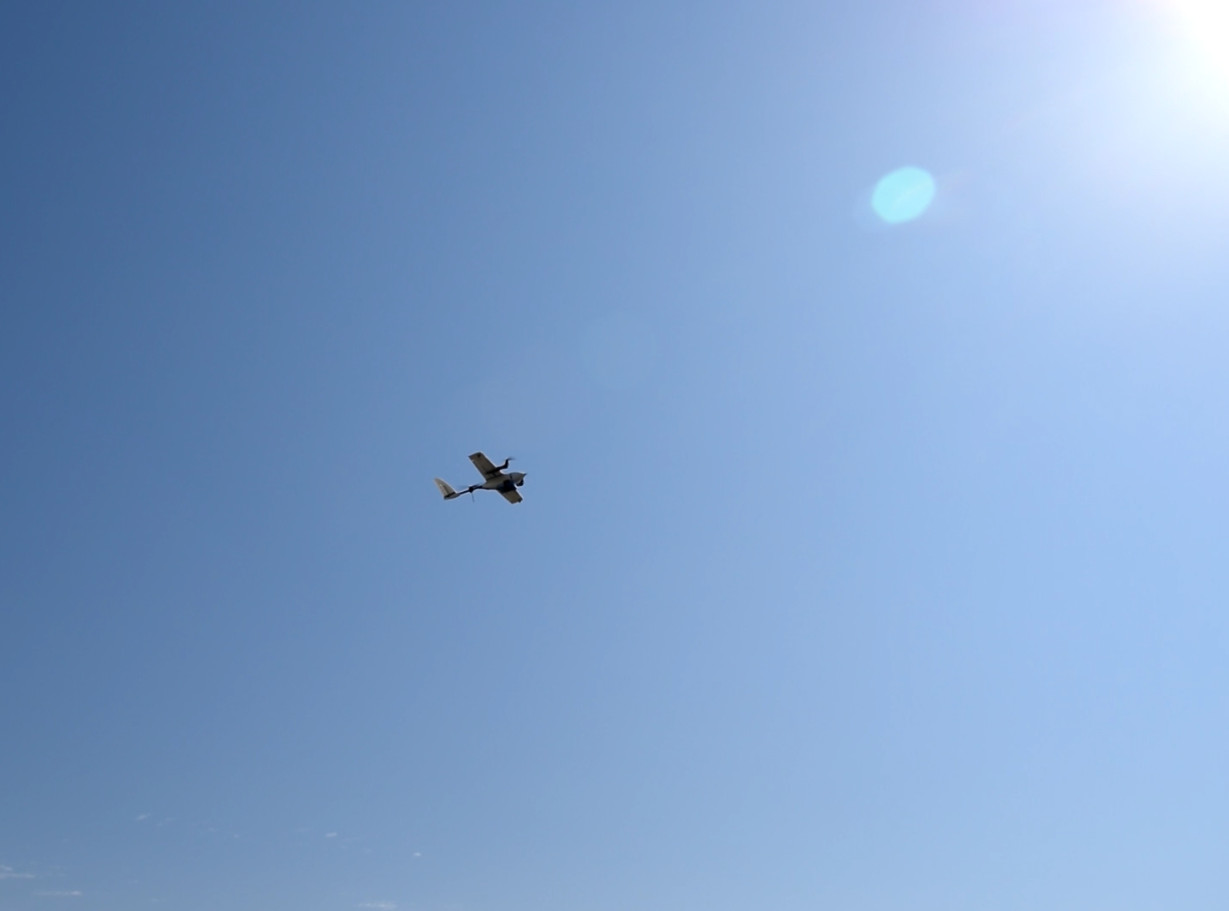 The OSU Nimbus VTOL V2 UAS in flight carrying the MaxQ medical supply payload during the flight test on April 16, 2020. 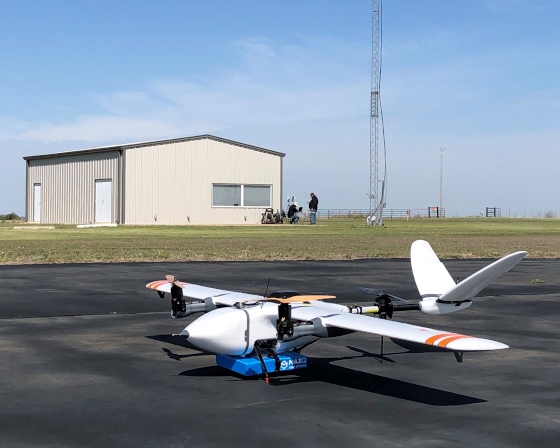 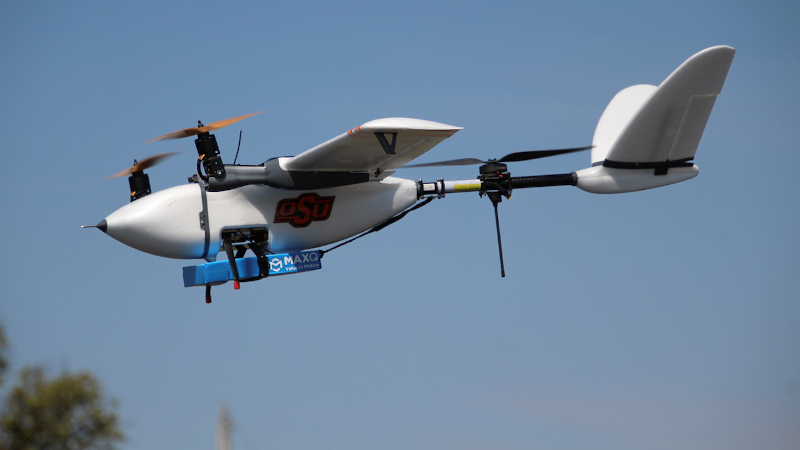 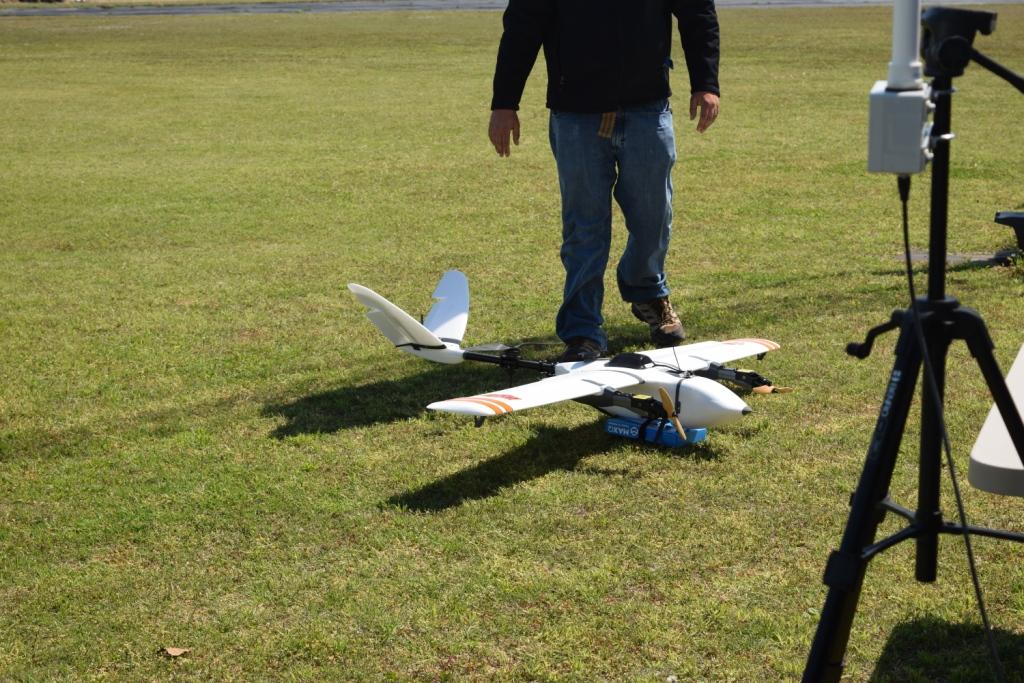 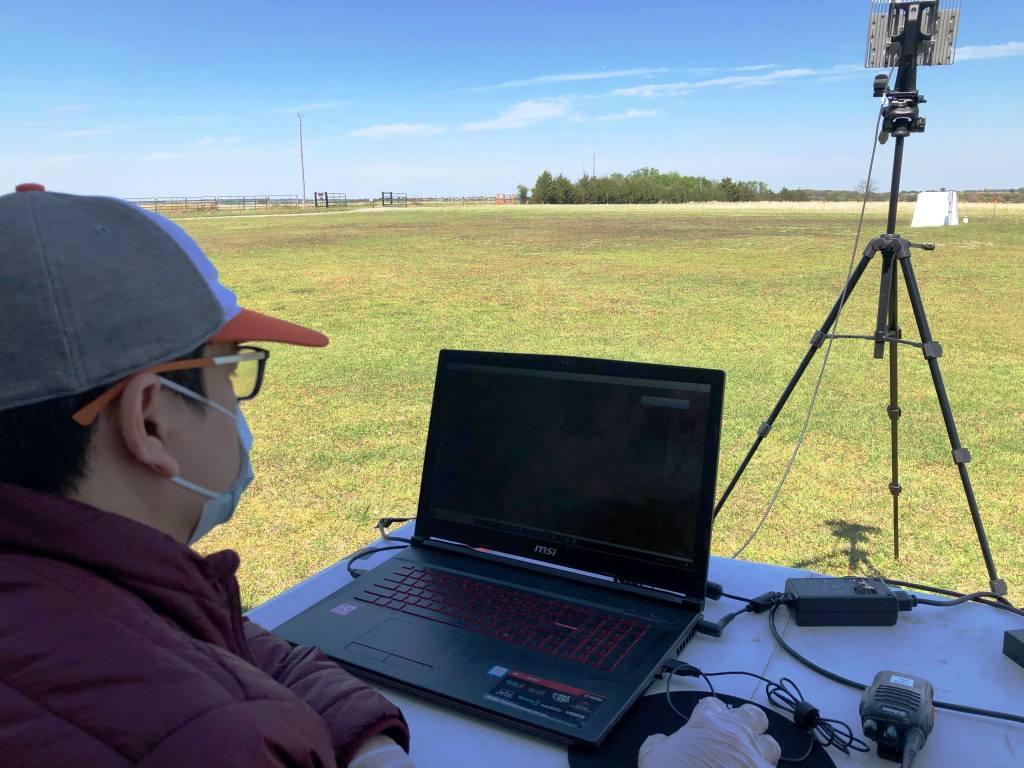 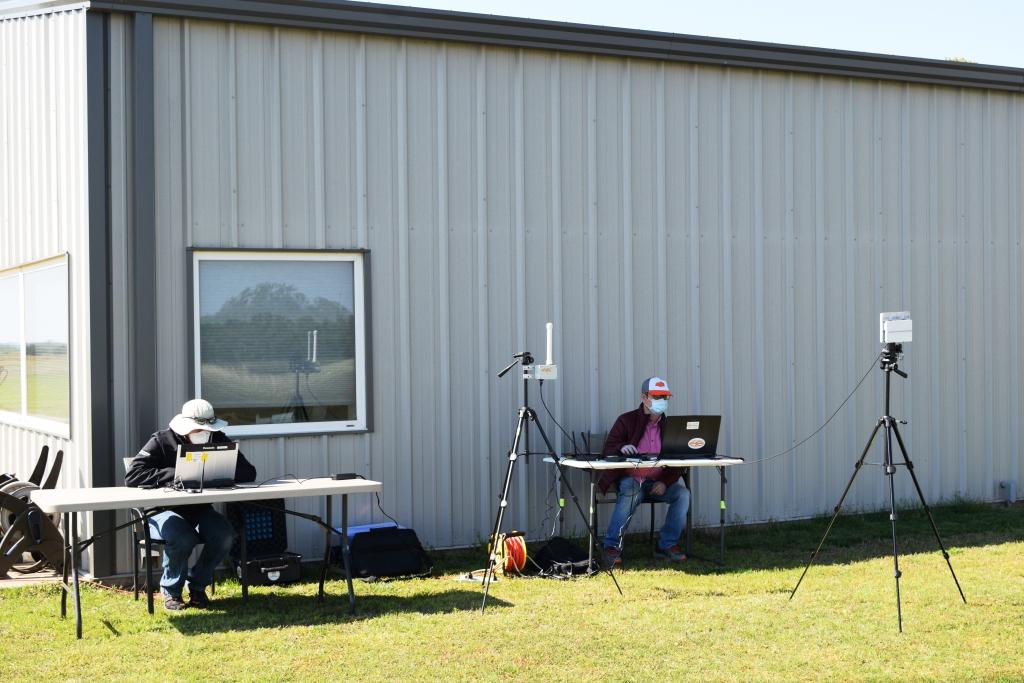 The mobile flight monitoring station set up at the OSU Unmanned Aircraft Systems Flight Station for monitoring the flights on April 16, 2020. 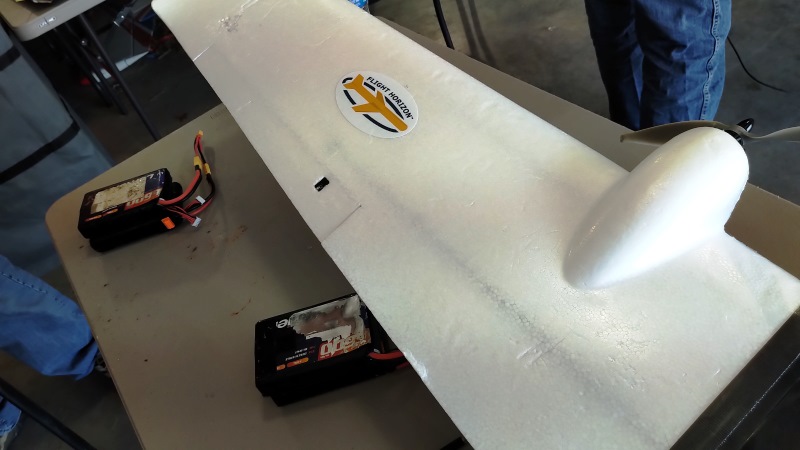 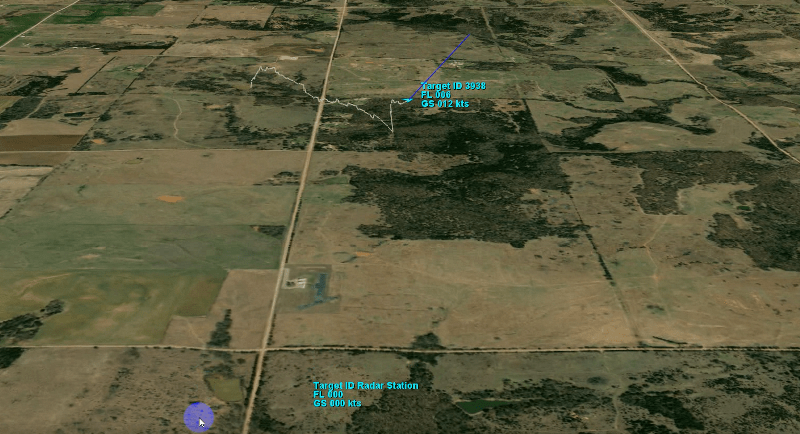 From the website:
Unmanned vehicles have become a revolutionary technology that is taking the world by storm. The OSU Unmanned Systems Research Institute (USRI) accesses expertise across Oklahoma State University allowing them to combine cutting edge product development with academic knowledge and resources to create unique solutions to critical problems. For more information on the OSU Unmanned Systems Research Institute, visit CEAT.okstate.edu/USRI.

The Oklahoma State University School (OSU) of Mechanical and Aerospace Engineering (MAE) instructs and encourages students to reach full potential in technical expertise, innovative expression, intellectual curiosity, and collaborative design. MAE’s mission is to prepare engineers that are competitive nation-wide and internationally for employment opportunities and who will become respected achievers within their discipline and prepared for a lifetime of continuing development. For more information on the OSU School of Mechanical and Aerospace Engineering, visit MAE.okstate.edu.

Our mission is to help our clients protect the safety of patients. Biologics and Biotech drugs must be maintained at specific temperatures to retain quality, maintain efficacy and prevent degradation. Our packaging systems meet strict requirements to help make sure your product is protected, maintaining the quality of temperature-sensitive products. The result is a safer product with almost zero risk of product loss during the shipping process, thereby leading to a cost and performance-optimized supply chain. MaxQ’s revolutionary transport coolers can store blood and medicine in a lightweight, thermally insulated package that monitors the state of sensitive payloads. Drones with MaxQ technology could rapidly deliver medicine in a system that would be especially effective in hard-struck areasFor more information on MaxQ, visit www.packmaxq.com.

Vigilant Aerospace is a technology company with offices in Oklahoma and North Dakota that provides the FlightHorizon detect-and-avoid and airspace management system for unmanned and autonomous aircraft. Based on an exclusively licensed NASA patent, the system accepts inputs from multiple data sources, fuses the data into a single picture of the airspace, predicts potential conflicts with other aircraft and then provides avoidance advisories to an unmanned aircraft pilot or airspace manager. The system helps unmanned aircraft to maintain safe distances from other traffic which is required to fly beyond visual line-of-sight. The system is currently used in NASA and FAA flight testing programs and has been the subject of multiple scientific papers. Visit our website at www.VigilantAerospace.com