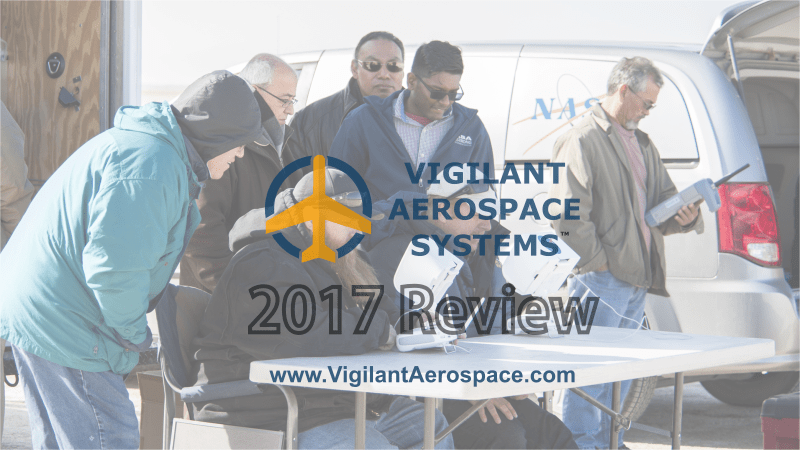 Vigilant Aerospace is delighted to share a quick video about what the team accomplished in 2017, including a tremendous amount of product development, flight programs, and industry engagement. Check out our End-of-Year 2017 Review video (2 min. 30 sec.) for a look back at Vigilant Aerospace’s activity this year: Video Transcript: 2017 was a year full of development, customer engagement, new product features, investment and awards for Vigilant Aerospace. Here’s a quick review. We started the year off with the announcement of our Beyond visual line of sight testing of FlightHorizon at NASA Armstrong, followed up with the announcement of many new FlightHorizon features, including compatibility with more sensors, better airspace logging and many new configuration options. Then, we won the Federal Laboratory Consortium’s highest national award for federal technology transfer, released a new explainer video about our product and published our new buyer guide. Mid-year, we supported Hurricane Harvey disaster response flights with the Humanitarian Drone team, who were flying for FEMA with five emergency flight waivers from the FAA, supported NASA’s SonicBAT supersonic research program using FlightHorizon for airspace safety and logging, and then got selected by NASA for use on the ND-MAX program, testing alternative aviation fuels in the US and Germany. We also flew FlightHorizon with public safety officers in Florida who have acquired a 30-mile extended visual line of sight waiver from the FAA for offshore patrols. We were selected as an R&D100 national Finalist for 2017, registered to participate in the FAA’s new Integration Pilot Program and are now working with 16 state governments to help them apply to set up the first unmanned aircraft Innovation Zones in the United States. Our beyond visual line-of-sight capable aircraft list now contains one hundred and eleven aircraft and remains a popular, free industry resource and one of our best ongoing outreach efforts. Finally, we co-Authored a paper with NASA about our Beyond Visual Line of Sight testing of FlightHorizon at NASA Armstrong and received an investment from The Flying Object, a venture fund that invests in the most promising unmanned aircraft technologies. This was quite a year for Vigilant Aerospace, and through it all, we remained focused on our mission of helping to keep the US airspace one of the safest in the world while integrating unmanned aircraft into our economy. Wishing you a happy holiday and looking forward to an exciting 2018 at the new frontier of flight.

Thank you to the NASA Armstrong development and flight test crews and to the Oklahoma State University Unmanned Aircraft Flight Station for providing testing facilities, extra pilot’s, and support for flight demonstrations.