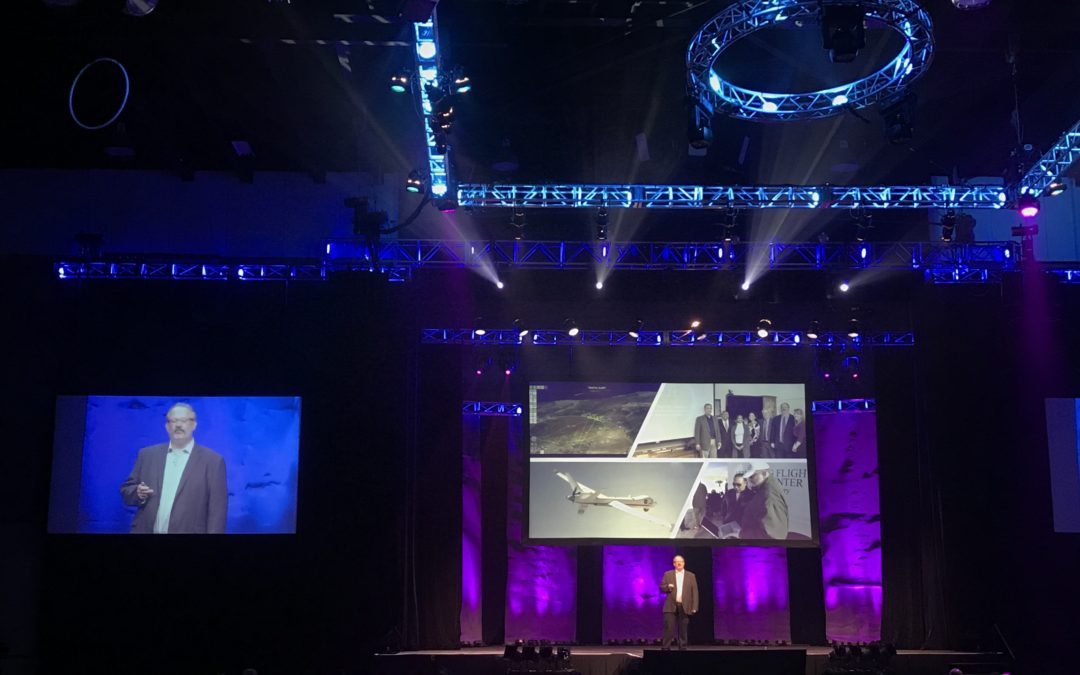 We are honored to have been invited to speak at the 2018 Drone Focus conference in Fargo, North Dakota in front of 500+ UAS industry professionals this past week. Vigilant Aerospace CEO, Kraettli L. Epperson took to the main stage on May 30, 2018 – the first day of the conference – to share insights into the safe integration of commercial and civil drones into the national airspace. For all of those who were not able to attend, we’ve created a short 5 minute 18 second video of the presentation:

From the video: Drones should be able to separate themselves automatically for the other aircraft. That was a concept that senior research engineer Ricardo Arteaga, at NASA Armstrong Flight Research Center, came up with in 2013. And, he built a system that, included: the algorithms, included some hardware integration, included the filters and then included the algorithms to do the actual tracking of aircraft, and then ultimately, to create avoidance maneuvers when necessary for those aircraft. He started flying in 2013 on something called the NASA Ikhana, which is a civilian Predator B and began testing that [system]. In 2016, my company Vigilant Aerospace licensed the patent and the software and we began working with that system in order to enable it to work in different airspaces and be able to work with different aircraft. So, we went out and we did some research at NASA Armstrong. We actually flew the system out there and began taking it out into the field. So, the system that we began commercializing is FlightHorizon. [It] includes the capability of detecting, tracking, and avoiding other aircraft. It includes the ability to pull in data from a variety of sensors and from online sources like UTM. [We] built that into an airspace model and are now able to detect when there might be a collision far enough ahead of time that you can send that information either to a pilot or a user interface or directly to an autopilot, which is really where we expect the world to ultimately go with fully autonomous flight. We saw this system tested in Hurricane Harvey with response and relief flights with the Humanitarian-Drones.org team. We brought a system and we sponsored that team with our system. [It] allowed them to have immediate airspace deconfliction. They were able to go out and work with the FAA to get five emergency COAs from the FAA and then fly for FEMA using our system to watch the other aircraft. Keep them safe. Keep their drones away from those aircraft. And ultimately, they were able to do, in a matter of two hours, entire neighborhood damage assessments that normally would take a week. So, that was a really exciting outcome. The other thing that we’ve had that has happened is that we have been called upon by NASA to work with a couple of really interesting programs. We’ve learned a tremendous amount. Upgraded and advanced our system a lot doing this. We were called upon to work with the NASA commercial supersonic technology development program and they’re using our system to track their aircraft, to deconflict and do a lot of flight tests off the coast of Florida and now a variety of other places for developing new commercial supersonic aircraft in the United States, which was really exciting. The other thing, simultaneously, is we were asked to work on the ND-MAX program, which is an environmentally sensitive program that is testing emissions and looking at different fuels and emissions. That in ND-MAX program flew out of Ramstein Airbase in Germany in addition to flying in the U.S. and they were able to use our system for detailed flight logging and also for actual aircraft formation keeping during the flights. So, as part of that process, we launched the new FlightHorizon COMMANDER system. This is actually intended for a command band or command center and it’s intended to be a system that is Federated – you can have multiple units. They all talk to each other forming one big airspace model. It allows you to drop in new sensors as they become available and can expand your system as your operations become larger and have new needs. We are really excited about that and that’s really based on what we’ve learned from NASA. So, most recently, we have been involved with the IPP program. We were selected to work with Alaska and work with the team right here [North Dakota]. We are very excited about that. We know that there has been some talk about that in-regards-to the operations that will be going on there. And so, we’re going to be learning more about this and, as we go forward, we’re just really excited that that initial idea of allowing drones to automatically avoid another aircraft has now generated an entire family of safety applications that we are taking to market as fast as we can. So, thank you very much. MC: You’re early stage company. There’s over 500 of us here today. What can we do to support you and your team to help you reach your full potential? Kraettli: Absolutely, so we are eager to get test customers using this system [FlightHorizon]. We’re eager to integrate with companies that have new innovative sensors and other ways to track. We track cooperative aircraft really well. We’re looking for people with great non-cooperative to different types of passive sensors and active sensors that can find these aircraft that aren’t on the transponder system. So, we’re looking for partners and we’re looking for places that we can test fly with you. MC: Where can folks find you if they want to have that conversation? Kraettli: Absolutely, so VigilantAerospace.com or @VigilantAero on Twitter. And, I will be around and would be happy to talk with you. MC: Congratulations. Keep going alright? Kraettli: Thank you. MC: Thank you for being here.   For more information on FlightHorizon detect-and-avoid and airspace management, visit our Products and Services Overview page.