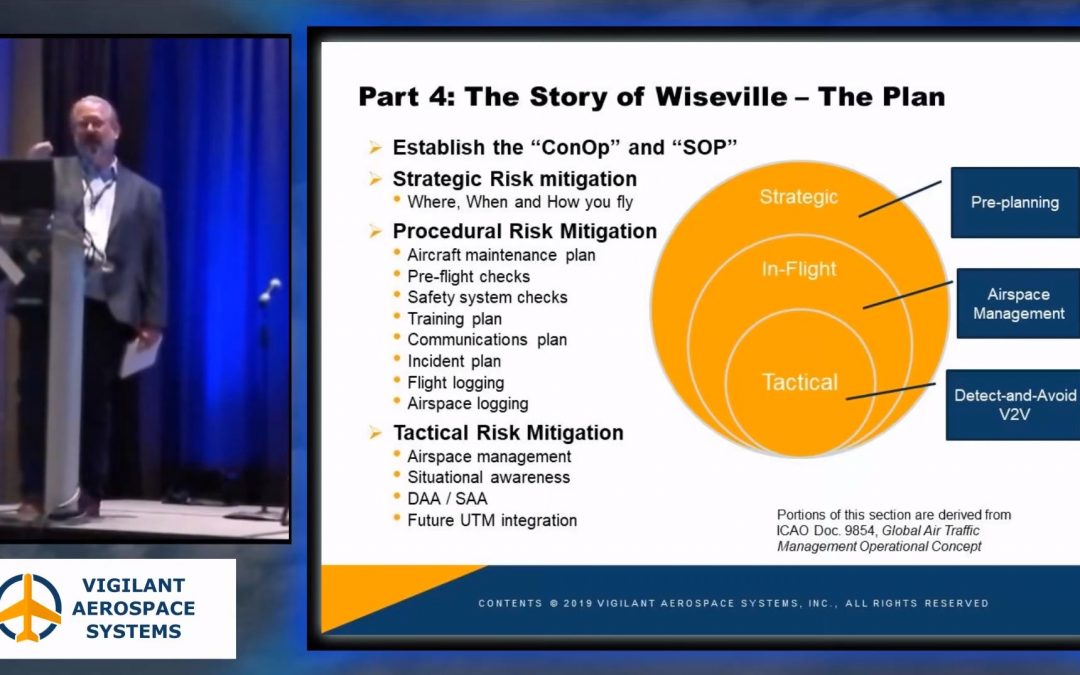 Vigilant Aerospace was a sponsor and presenter at the recent DronePort Network Seminar “Unlocking the Potential in Your Community” produced by the DronePort Network as an AUVSI 2019 XPONENTIAL co-located event in Chicago, IL on April 29th. Vigilant Aerospace CEO, Kraettli L. Epperson, presented a session on “The Central Role of Flight Safety Systems and Airspace Management in Droneport Development” as part of the half-day seminar.

From the seminar description: Setting up a droneport or unmanned aircraft system (UAS) program can be a complex process, especially when complying with standards and regulations, managing FAA authorizations, and providing responsible airspace management. Flying drones near controlled airspace or beyond visual line-of-sight (BVLOS) requires unmanned aircraft operators to be able to detect-and-avoid other aircraft and to maintain well-clear distances.   This presentation will help you to understand and begin to address these safety and regulatory challenges with the strategies, processes and technical solutions available today to implement safe and compliant airspace management for your droneport. In addition, seizing the initiative to supply your users and tenants with ready solutions to these safety and regulatory challenges can immediately improve the competitiveness and economic impact of your droneport while enhancing the value of your program for your users and community.

Special thanks to the DronePort Network (Droneports.org) for inviting us to speak at the Droneport Seminar, a 2019 AUVSI XPONENTIAL co-located event. You can watch the full presentation and read the transcript below (32 minutes and 45 seconds):

Quick, “Jump-to” video links: From the video: Vigilant Aerospace Systems reached several major milestones in 2018 in our mission to bring automatic detect-and-avoid and intelligent airspace management to the commercial drone industry using our FlightHorizon product. In 2018, FlightHorizon was selected to provide detect-and-avoid and airspace safety to two of the FAA’s ten integration pilot program teams. The Integration Pilot Program is the FAA’s flagship program to test systems and develop standards for routine beyond visual line-of-sight flights and package delivery using drones. Vigilant Aerospace Systems is working with the Integration Pilot Program teams in North Dakota and Alaska. This past year, FlightHorizon was used in the program to provide airspace monitoring for the first IPP drone flights over people at the FargoDome in Fargo, North Dakota during a large annual football tailgating party. The flights were carried out by CNN and BotLink and observed by representatives from the North Dakota Department of Transportation and the Federal Aviation Administration. In 2018, we also partnered with the Unmanned Systems Research Institute at Oklahoma State University to use FlightHorizon to monitor air traffic and track drones flying in a new 13-mile drone corridor in central Oklahoma that allows unmanned aircraft flight beyond the visual line-of-sight of the pilot. The new corridor, approved under an FAA Certificate of Authorization, will allow Vigilant Aerospace Systems to demonstrate flight safety using FlightHorizon over much longer distances and continue to lead the industry in the development of automatic detect-and-avoid systems for drones. Also, at the request of NASA, we developed a special version of FlightHorizon, called FlightHorizonX, to track supersonic aircraft and spacecraft. The FlightHorizonX system was used in 2018 to track and log NASA’s Commercial Supersonic Technology Project flights in California and Texas, testing new transponders and quiet supersonic booms. Soon, we also expect to be tracking spacecraft. In September, we announced our partnership with the new DronePort Network and presented a seminar on “Obstacles to launching a droneport and how to overcome them” at the organization’s inaugural meeting. The meeting was attended by industry professionals from 10 states and 28 organizations. We also joined the ASTM F38 committee, which is currently setting national standards for unmanned aircraft. We serve on two working groups side-by-side with the leading researchers, airspace regulators and current commercial technology leaders on setting standards for detect-and-avoid systems for the industry. Overall, 2018 was an outstanding year for the Vigilant Aerospace team and we expect 2019 to be an exciting year with the official launch of FlightHorizon COMMANDER, participation in additional supersonic flights with FlightHorizonX, and support for many groundbreaking beyond visual line-of-sight flights throughout the US that will help to advance new regulations and push the entire commercial drone industry forward. For more information on FlightHorizon or to schedule a demonstration, please visit www.VigilantAerospace.com. And, be sure to follow us on Twitter @VigilantAero.