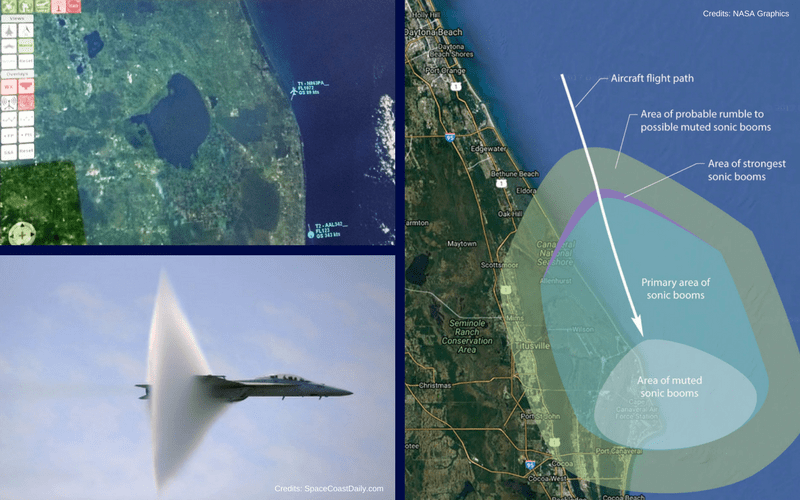 Vigilant Aerospace is excited to announce that FlightHorizon is being used in a major research project conducted by NASA Armstrong Flight Research Center in Edwards, California in conjunction with NASA Kennedy Space Center in Titusville, Florida to measure the effect of low-altitude turbulence on sonic booms reaching the ground.

FlightHorizon software uses data from standard aviation transponders and radar, when available, to provide a 2D map-based view and 3D synthetic cockpit view of national airspace and full sensor fusion across aviation transponders, radars and online data feeds. The system is designed to help operators maintain flight safety, provide aircraft alerts and warnings, and provide specific commands to maintain well-clear distances, when necessary. The system also provides detailed airspace logging of all detected aircraft multiple times per second and full flights can be re-played in FlightHorizon from the logs. The system can also provide full binary logging of aircraft signals to allow for later detailed analysis. These flights are part of the Sonic Booms in Atmospheric Turbulence (SonicBAT) flight research program. The program involves supersonic research flights by F-18 aircraft off the coast of Florida. Led by researchers from NASA Armstrong Flight Research Center in Edwards, California and carried out at NASA Kennedy Space Center, these flights are the first time that NASA has utilized FlightHorizon in mission-critical flight operations.

“We are gratified to see FlightHorizon used to the full extent of its capabilities for these important flights at Kennedy Space Center,” said Kraettli L. Epperson, CEO and co-founder of Vigilant Aerospace. “The product provides a wide range of powerful airspace monitoring, visualization and logging functions, in addition to providing autonomous detect-and-avoid capabilities for unmanned aircraft. We expect this project to open up new opportunities for future use of FlightHorizon for both research projects and for manned aircraft monitoring, logging and flight safety,” said Epperson. 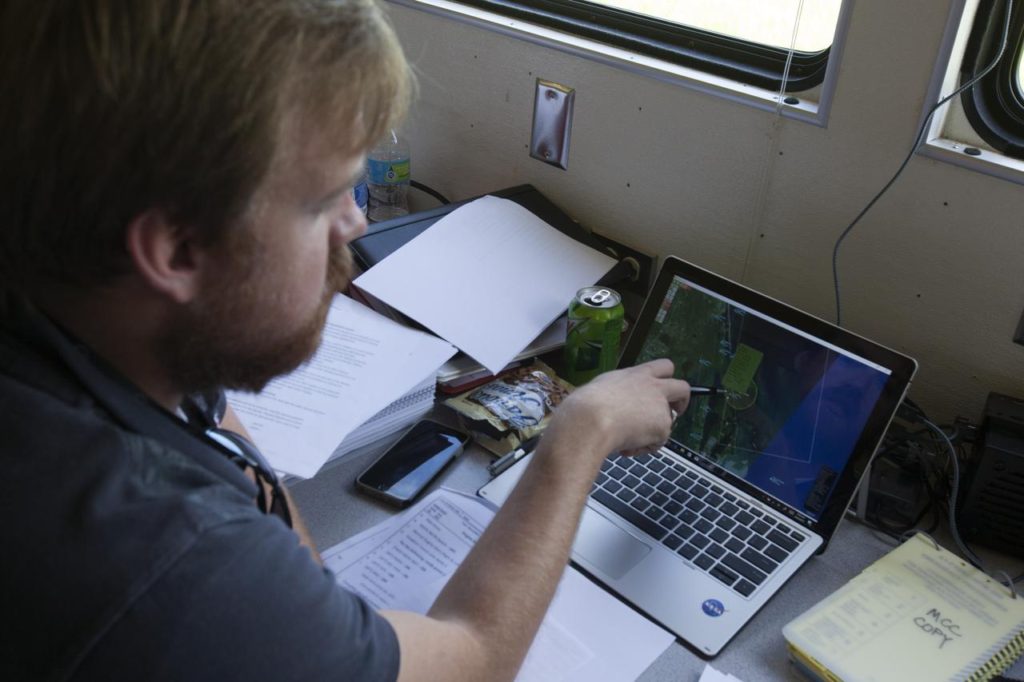 Photography Credit: NASA/Bill White – An engineer in a control trailer at NASA’s Kennedy Space Center in Florida monitors data using FlightHorizon before flights of agency F-18 jets to measure the effects of sonic booms. Several flights a day have been taking place the week of Aug. 21, 2017 as part of NASA’s Sonic Booms in Atmospheric Turbulence, or SonicBAT II Program. 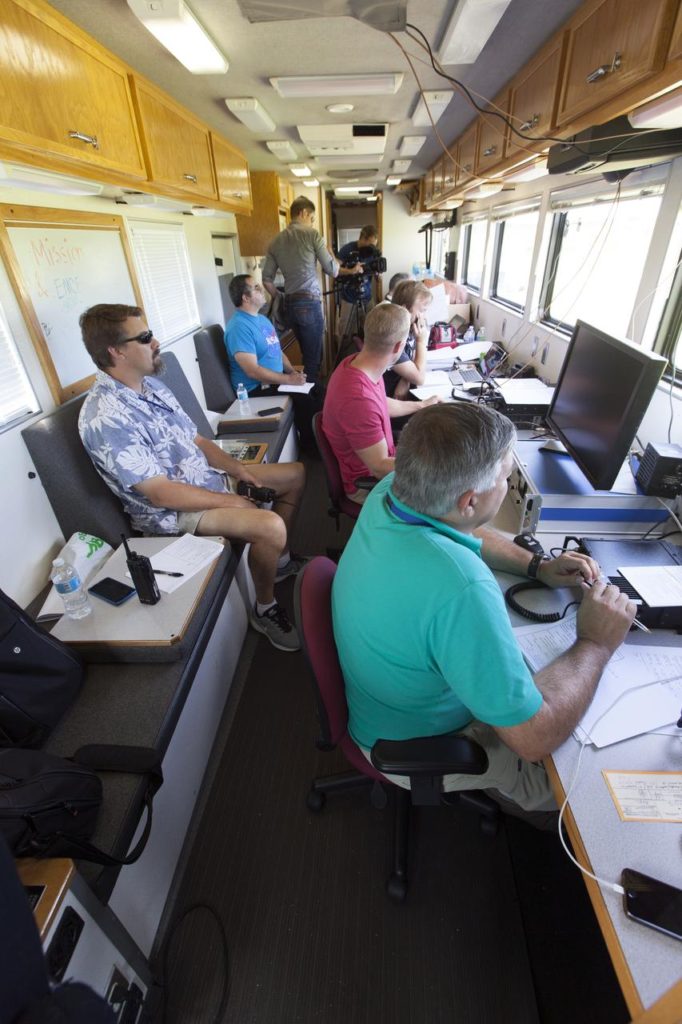 “We’re taking you behind the scenes of NASA’s SonicBAT project with the research pilots flying the missions! Learn all about what makes supersonic technology so important to the future of aviation. Post your questions below and we’ll answer them on-air! #FlyNASA”

Aug 25, 2017 – SonicBAT Project Manager Brett Pauer briefs media on NASA’s effort to quantify the effect of atmospheric turbulence on the propogation characteristics of noise caused by sonic booms. SonicBAT sonic boom testing has been previously carried out at Edwards Air Force Base in 2016, with Florida being chosen because of its’ high summertime humidity levels. Thunderstorms passed thru the area at noon and canceled the days activities.

Wheels up! Let’s do some sonic boom research! #FlyNASA pic.twitter.com/DtnMcSjnK0

About the NASA SonicBAT Program 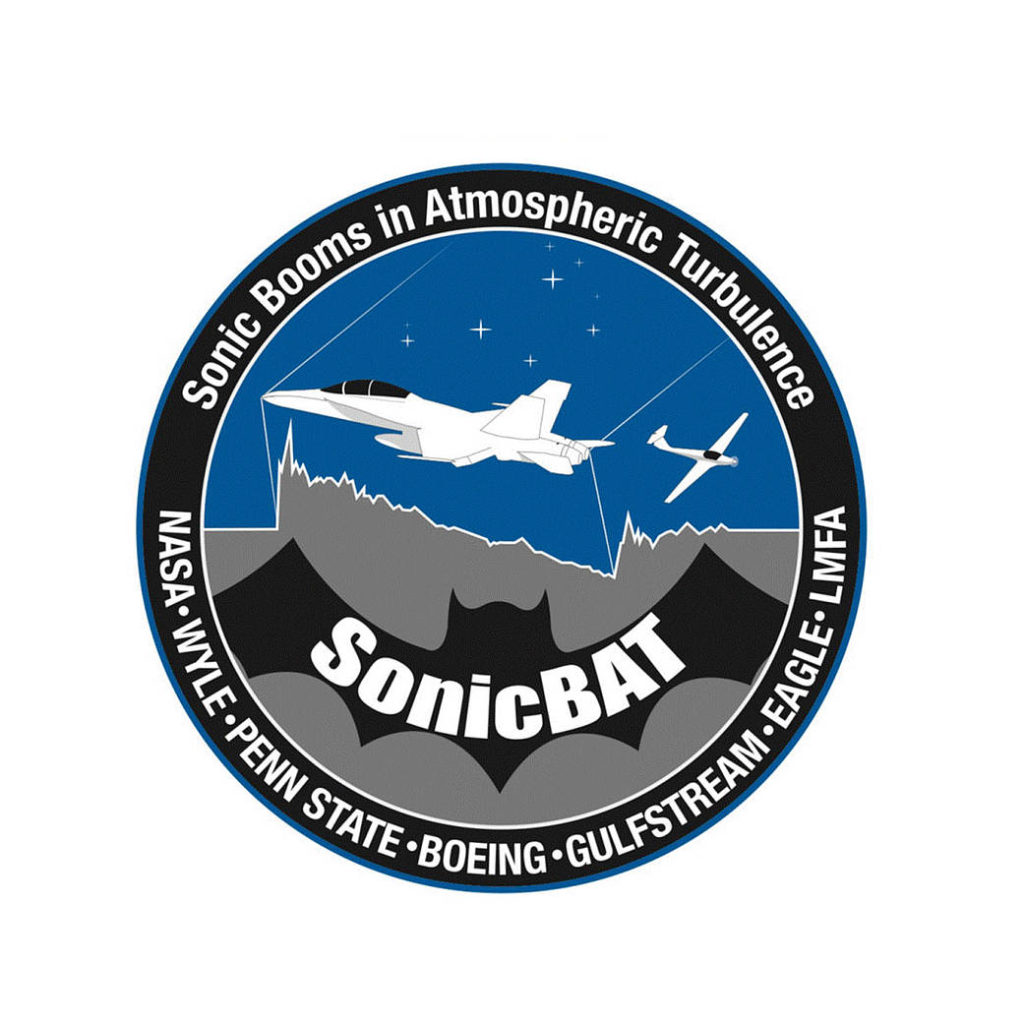 The goal of the Sonic Booms in Atmospheric Turbulence (SonicBAT) program, led by NASA Armstrong, is to research and measure the effect of low-altitude turbulence on sonic booms reaching the ground and to help make supersonic aircraft quieter to operate. The flights are designed to collect sonic boom signature data during turbulent atmospheric conditions to develop models of the effects of turbulence on sonic booms. The flights will include flying NASA F-18 aircraft at speeds of Mach 1.38 to create shockwaves, which are measured both from aircraft and from sensors on the ground. FlightHorizon is used to monitor and log the flights, as well as monitoring the airspace around the testing area. SonicBAT is the first modern flight effort designed to measure this phenomenon. Read more here. About NASA Armstrong Flight Research Center NASA Armstrong Flight Research Center is the agency’s lead center for atmospheric flight research, operations, and testing and continues to accelerate advances in science, technology and exploration to enhance knowledge, education, innovation, economic vitality and stewardship of Earth. Armstrong supports the agency by providing flight research and development for NASA aeronautics, and global flight operations and development for NASA science in support of astrophysics and earth science. Learn more here. About Vigilant Aerospace Systems Vigilant Aerospace Systems, Inc. is a provider of industry-leading airspace management and safety systems for both manned and unmanned aircraft. The company’s software platform, FlightHorizon™, is based on an exclusively licensed NASA patent and provides situational awareness, synthetic cockpit views, commands to maintain well-clear distances, and other flight information to enable integration of commercial drones into the national airspace. For more information, visit www.VigilantAerospace.com. More information about the research project can be found here: