The FAA released a new Aerospace Forecast for 2017-2037 on March 21 that includes both some startling 2016 numbers and a forecast for continued rapid growth of the commercial UAS industry in coming years.

In addition, FAA Administrator Michael Huerta has delivered opening remarks for the FAA’s Unmanned Aircraft Systems Symposium today, March 27, that include the very latest numbers on the UAS industry. 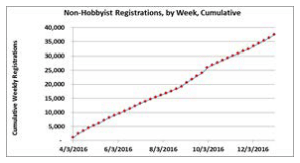 Included in the forecast are current registration numbers and projections for Commercial Small UAS (sUAS) regulated under Part 107. Since opening the sUAS online registration system in April 2016, the FAA reports more than 44,000 commercial sUAS have been registered through the system, which averages to about 1,000 commercial (non-hobbyist) drones per week.

Based on this new information, the FAA forecasts that the national commercial drone fleet will likely grow by nearly 10X by 2021 with a forecast of 420,000 commercial UAS registered by that year.

FAA Administrator Michael Huerta’s opening remarks for the FAA’s Unmanned Aircraft Systems Symposium today reported that there have been 770,000 drones registered in about 15 months, including both hobbyist and commercial drones.

According to the forecast, the FAA expects the commercial sUAS sector to continue strong growth: 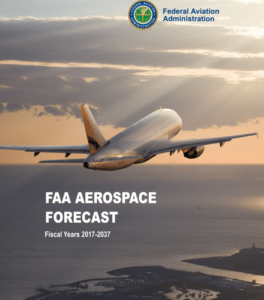 The commercial drone sector is very dynamic and appears to be at an early stage of growth. Unlike the hobbyist sector, FAA anticipates that growth in this sector will continue to accelerate over the next few years. Given the clarity that part 107 has provided to the industry, increasing commercial applications will become likely, which will facilitate additional growth…

The forecast commercial small UAS fleet is primarily (over 95%) consumer grade off-the-shelf aircraft due to lower prices, ease of use, and availability. However, the higher-end, bigger, professional grade fleet stands to expand rapidly over time, especially as newer and more sophisticated uses are devised. Thus, while most (over 90%) of the growth in the commercial small UAS fleet will come from the consumer grade UAS, we anticipate a significant portion of commercial growth will come from professional grade UAS as well. 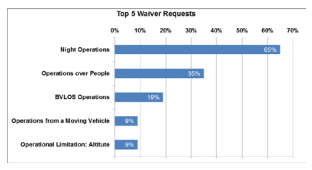 As of December, 2016, the FAA had issued more than 29,000 Remote Pilot Certificates under the new Part 107 rules, but this number has grown rapidly and FAA Administrator Michael Huerta stated in his remarks today that as of March 2017 the number of Remote Pilot Certificates had grown to 37,000 (from Unmanned Aircraft Systems Symposium 2017 opening remarks from FAA Administrator Michael Huerta).

In addition, the new FAA forecast expects continuing rapid growth in the number of remote pilots with a number between 211,000 and 422,000 by 2021.